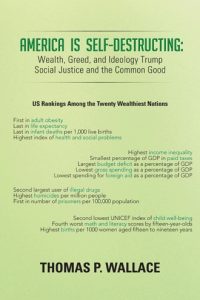 During the last half-century, American society has evolved from a predominantly societal-focused individualism, epitomized by its World War II effort, post-war economic restoration of Europe, and equitable sharing of the 1950s through 1970s historic economic prosperity among the population to being transformed to a post-1980 excessive self-oriented and self-indulgent individualism. A cohesive, compassionate, and altruistic spirit has been dismissed, considered a deterrent to an individual’s aspirations of great wealth, status, and personal recognition and satisfaction. Whereas, greed, ruthlessness, and achieving competitive advantages over others in business and politics via shameful values and ethics and morally flawed behavior are now recognized as the strategy to fame and fortune.

Each generation has participated in fewer public meetings, religious services, professional organizations, community projects, and political causes. Time devoted to assisting the less fortunate and donations of earned income to charitable causes has appreciably declined. Hostile attitudes of anti-altruism, anti-government, anti human rights, and unethical political obstructionism have blatantly flourished. And, corporate citizenship, responsibility and empathy for the worker, social justice, and the common good have been abandoned. Human rights are extended sparingly to others, but restricted by one’s values and biases derived from family and religion, race, and social and political subcultures.

America’s post-1980 destructive socio-political transition was catalyzed by an infectious arrogance of Me, Mine and More that evolved from the historic prosperity of the post-war era and the backlash to the civil rights movement and legislation, which threatened the southern white supremacy culture and national conservatives. Opportunistically, the Republican Party, the nation’s historic Party of Business, adopted Southern voters and evangelicals, and rural conservatives nationally. The new Republicanism agenda has remained, anti-abortion, anti-gun control, an intolerant religious ideology, anti-immigration, anti-universal health care, anti-tax, and anti-regulation, while supporting states’ rights, small government, and reduced spending for support of the less fortunate. Consequently, the wealthiest Americans have acquired record income, while the South and conservative religious and social issue advocates have attained unprecedented and disproportionate political clout.

But clearly, American capitalism remains exceptional by virtue of its spirit of innovation, entrepreneurship, global economic achievements, and creation of abundant wealth. However, its current international ranking among the twenty richest developed nations in providing for the broad-based well-being for its citizens is dismal, discouraging, and immoral. Thus, as the potential for America’s greatness continues to wither, its performance since 1980, as experienced by average citizens, does not measure up to greatness, much less exceptionalism.