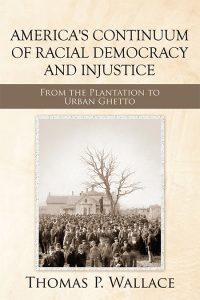 America’s 21st century antagonistic social and political division according to race, ethnicity, religion, economic class, and social caste has existed since the colonial era. Fundamentally, the severe polarization is a consequence of the nation’s persistent irrational and uncompromising ideological warfare over the nature of its democracy, a progressive Jeffersonian social democracy versus a regressive conservative southern-led racial democracy.

Initially, slavery was the primary economic tool providing abundant prosperity for a small Old South white wealthy elite, who, over time, established a slave-based society, dominated by a politically powerful aristocracy. And, religion and racism have proven to be effective strategies of class oppression to preserve white supremacy and the southern heritage. Consequently, undercurrents of racial discrimination, exclusion, and exploitation have been perpetuated via legalities emanating from an initial, intentionally flawed constitution that permitted slavery to exist. Strikingly, in the 1860s, 4.4 million or 17 percent of the U.S. population were slaves, with the Southern States average being 34 percent blacks and South Carolina 57 percent. So, what were the colonists thinking would be the impact

of this massive importation of black slave labor, legal human property subjected to a brutal inhumane existence and the whims of their owners on the long-term future of American society?

Well, since Emancipation, reality has been an amended Constitution that allowed the South’s brutal quasi-legal Jim Crow governance to exist and, since the 1980s, condoned politically contrived race-neutral legislation and policies that has disproportionally targeted minorities, resulting in discriminatory housing, voting, policing, and criminal justice outcomes. As a result, the Old South racial democracy and injustice has successfully prevailed from the plantation to the modern urban ghetto. And, in 2016, for those who were not convinced that racism was still a dominant force in American society, the election of Donald Trump should have left no doubt that the Old South’s racial democracy remains robust. Also, the election resulted in the new post-1990 all-white Southern-styled conservative Republicanism controlling all three branches of the federal government. And, in 2019, of the 252 Republican members of Congress, only 3 were African American. Lincoln’s progressive Republicanism had been supplanted by the regressive 1950s Southern Democratic Party ideology of white primacy.

Thus, over the centuries, excessive white self-serving social and economic privilege, religious ethno-cultural racism, and a destructive anti-progressive, anti-intellectual, and anti-scientific conservative mentality has been ingrained within the nation’s DNA. This is America’s continuum of racial democracy and injustice.